Cuts or No Cuts, the Arts will always Matter

Over the years that I have been writing this blog and trying to muster some thoughts around how we might defend ourselves against the swingeing ongoing cuts that threaten livelihoods, professions, practice, creativity, educational attainment, health and wellbeing, civic participation, community development, international profiles, tourist offerings, economic growth – it seems that mostly I’m talking to the sector without really penetrating the halls of government and in any case, there are other factors to consider as well.

Last time out, we had a rally, we urged a minister in face to face and rather frank discussion (we did – I was there!) and we saw the development of the first all-party group on the arts established at Stormont. Of course now, we live in a place that has not has a government since December effectively. And the countdown is on to an early October Assembly election.

So here and now, I really wonder what we should do as a sector because both what we have said and what we have done clearly has not worked – brutally evidenced by newest wave of in-year cuts announced last week by the Arts Council of Northern Ireland.

ACNI introduces these cuts to the sector by stating: "Further to our letters of offer dated 1 April 2017 covering your core and programming costs, the Council has now received further information on its 2017/18 budget allocation from the Department for Communities. At this point the Arts Council is receiving a 4% cut to its overall budget and unfortunately, for the first time, we have to pass this on to all AFP clients.

The value of the cut to the Council means that we will have to impose a 5% cut on our exchequer allocation to your core costs. We will, however, be able to continue to offer you the full amount of our Lottery award towards your programming costs." Here is the effect of the cuts across the sector. You’ll notice that I have added in last year’s figures as well.

Extracting good news from The Arts Council’s announcement has the air of “things could be worse”.  For 2017/18 exchequer grants for core costs of arts organisations total £8,369,796, while national lottery funding of £4,701,891 supports programming. For the eagle eyed and hyper-mathematical, the figures supplied on the ACNI website press release didn’t quite add up, but we get the general drift, even if the awarding of an additional 50 quid to the Lyric may not feel like much of an uplift to them, considering that others received relatively much more.

The Arts Council does have its reasons for these three instances (actually, its just two, following a correction regarding funding that was announced last year but not subsequently updated, apologies for that) that appear to go against the otherwise universal trend of cuts and I am not for one moment going to single out colleagues or question those decisions - but instead I wanted to draw attention to the “mitigation” as the Arts Council puts it, and the effect on organisations and indeed others wishing to prevail on arts funding, like artists, community groups, bands etc.
The press release on the Arts Council website reported Roisin McDonough commenting that “In the context of an uncertain funding environment, this announcement of £13 million will support the valuable work our artists and arts organisations deliver for the benefit of everyone in Northern Ireland. The ACNI messaging is rather interesting in that they are putting forward a very positive face on this –investing a headline figure of £13M, but of course, this is also a reduced figure and in trying to shore it up, “the mitigation” that ACNI speak about, they are having to reduce other allocations of Lottery funding. This is not a zero sum game. 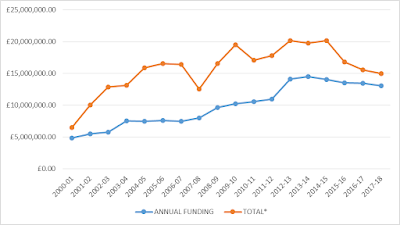 The public funding of the arts is a somewhat closed system, with 2 main channels of resource – one from government voted for funds called Exchequer and the other flowing from our slice of Lottery funding. Most of the time, you will see details of Treasury funding, the allocation made by ministers and their departments and ultimately paid for by tax receipts. It is this funding source that hitherto has been the most contested because it is ultimately under political control. (But we have no local Assembly, I hear you say. True, but we do have government departments that are still making decisions precisely because they have no Assembly with no budget to tell them otherwise. N Ireland is running out of money because we only get, as I’ve mentioned before, maximum percentages (75% and 90%) of our bloc grant offered when there is no budget in place.) National Lottery Fund money is dependent on how many people play the growing variety of games on the various nights of the week and how may scratch cards are purchased etc etc. Its an aggregate of a great many investments as well. Unfortunately however, the income trend for both is declining, but Lottery funding to the arts is currently dropping far faster than Exchequer. 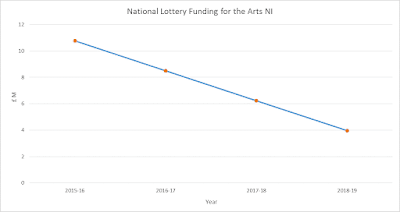 So, how do we lobby for change when we have no Assembly and further uncertainty around lottery funds. To whom do we turn when we see the funding that the Arts Council is provided slashed year for year and that trend is utterly unsustainable for a sector that should and must be central to this or any society.

I think one thing that we could do right away is to promote the Lottery and the funding we desperately receive far more than we are doing. There are 107 arts organisations whose programming is almost wholly dependent on people playing the Lottery. For an organisation like Community Arts Partnership, it means that funding flows back to those areas where people are most likely to be playing. It means that almost 5,000 people across all age groups, and areas have the chance to participate, create and author their won art work. For every organisation, there is a debt of gratitude to each and every Lottery player that perhaps we should be more willing to publicise.

For a sector, that is rightfully publicly funded and as such principally dependent on government and public investment, where do we turn. Is it pointless asking that to a sector that continues to find other money and competes in every possible instance for funds and philanthropy? Bearing in mind the characteristics of arts funding across the UK  and the low level of philanthropic giving, the struggle to analyse and identify solutions is as complex and urgent as the areas of activity as John Holden puts it Culture is often discussed as an economy, but it is better to see it as an ecology, because this viewpoint offers a richer and more complete understanding of the subject. Seeing culture as an ecology is congruent with cultural value approaches that take into account a wide range of non-monetary values.

Non-monetary some values may be, but their translations into real economic value and intrinsic cultural value is evident. But of course, not everything that counts can be counted as an apocryphal Einstein would have it.

There is an indisputable and fundamental right to participate in the cultural life of our society, enshrined in statute and chartered declarations, conventions and protocols. Therefore that relationship between the arts and polity necessitates citizens’ access and public investment.  The same attaches to investing in health. We do so because it saves lives, it protects workforces, it offers a safety net to the most vulnerable, and it promotes the ideal and outworking of equality. The arts do the same. Recently, we saw a restatement of what public investment in the arts and in health might ideally look like for a neighbouring state like GB. Perhaps they might yet achieve that in the not so distant future.

The NHS is the second largest employer in NI. Investing in health pours money into our economies as well as our health and well-being. The arts do the same, employing over 5,000 full time equivalents and promoting a creative economy, supporting the civic and personal health and well-being of this place and its people.

At the recent “Assessing the Challenge” meeting on May 17th here in CAP, what was clear was that the arts sector very soberly understood the challenges around changes that could be made about how we operate together but also how we should lobby for the continuation and furtherance of our role. At this rate of in-year cuts, in a very short space of time we will see the arts shudder to a halt.

As for local Exchequer funds, we need a new strategy, a new conversation. ArtsMatterNI is meeting again on Wed 21st June in CAP, to take forward the conversation that we re-began in May. Do join us, or participate on-line and offer your wisdom and support.