Creativity for all our sakes

People may not be aware of the guidance offered in the song “Mamas, Don’t Let Your Children Grow Up To Be Cowboys” but I’m sure you get the gist of the message. The peremptory advice that there are some careers that are less desirable than others has been the concern of parents for thousands of years. Now, as published by the Economist this month, we see that arts graduates can anticipate the least financial advantage 5 years after graduating than a host of other professions. 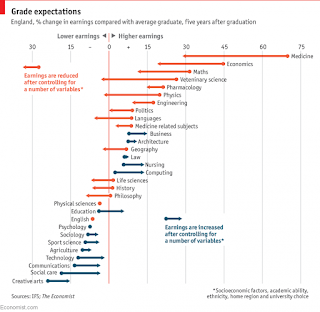 It makes for troubling reading and of course the asterisk in small print has a lot of significance here in Northern Ireland where years of cuts and under investment in the arts have taken their toll.
But, as a father with two daughters, I am far from advising against careers that are creative and arts based – why? Because of a host of reasons, economic, social, personal and strategic.

True, the economics of the arts continue to be problematic, even at the best of times. For example, you still need roughly the same number of cast members (if perhaps not all the crew, directors and assistants) to perform a Shakespeare play today as you did 3/4 centuries ago but often the size of the audiences hasn’t changed significantly over the years. For any arts organisation, the elements of risk and adventure related to the development of something original, untried and untested, is riven with potential economic pitfalls. Even the healthiest of arts organisations in the most stable of funding environments can fall foul to the vagaries of audiences and productions etc.

But, if one accepts and embraces risk –as each and every artist does with the first mark made on a page – the rewards may be varied but they can be equally and simultaneously invaluable to themselves and people, communities, institutions, cultures and places. The challenge of course is to communicate that potential adequately to those that see only one facet of the arts, who only view the arts through the crude single dimension of cost benefit analysis – and ask only, does it make money?
I have often quoted the Arts for Arts Sake 2014 report from OECD on here, because it has pointed to the relationship between creative education and raised productivity and living standards in society. But, the more I think about this, the more I tend to think this may be a correlation rather than a causation and that hunch was amplified after I endured listening to Mariella Frostrop’s Bringing Up Britain episode exploring creativity for children.  Are we bringing up children creative enough for the future they face?

"The World Economic Forum forecasts that by 2020 creativity will be in the top 3 most important skills for future jobs. Many children going into school now will grow up to do a job that doesn't yet exist; faced with the challenges of AI, automation, green issues and an ageing population, creativity and imagination will be vital."

To find out where creativity comes from, how best we can nurture it and test the creative health of the Britain, Mariella was joined by experts, some as proponents of an ideology that sees the arts as serving some or other corporate developmental purpose: Vincent Walsh, Professor of Human Brain Research at University College London, Bernadette Duffy, early years consultant, John Last, Vice Chancellor of Norwich University of the Arts and Innovation Manager Nick Skillicorn.

Among some platitudes and plummy voices, decrying the ‘middle class whining about the arts’ as I believe was uttered, there was this overbearing economic analysis and subtext that said the society would be more industrially competitive, would be more innovative, wealthier and that creativity would help deliver that. The arts were once again consumed by this over-reaching economic argument – and in so doing they lost every iota of beauty, power, elegance, debate, fun and truth. They lost their very essence and instead were replaced by the abject instrumentalisation and indeed subjugation of human artistic talent to the promotion of the economy. Everything was geared to economic necessity, ridiculously harnessed to notions of neoliberal financial gain, that creativity was a Darwinian tool to eke out a material advantage over competitor nations and corporations. It was the most bleak of outlooks and for me signalled that we must not let these people author a new orthodoxy about why we need the arts and determine what matters to us as people. It was how they related creativity to economic value and how dogmatically they reduced creativity to this uninspiring quest for cash. Experts!

Ask any artist, or look at the graph, the nature of making art is not to acquire money – it is to explore the previously unimagined, to depict originality, to relate the personal to the global and back and to offer perspectives. None of this penetrated the austerity of this economic bluster. But we all need to live and as accomplished professionals, we should all have the prospect of sustainable careers. Artists of any and all disciplines are arguably more important than any other profession if we believe creativity to be so invaluable to future economic well being. But at the very least, we need to recognise and invest in our creatives, those that can most easily demonstrate that power, in whatever context.

Whilst the programme talks about a fall of over 25% take up of arts at GCSE, they immediately commented that “creativity is no more than problem solving in a useful and unexpected manner.” Whereas the OED defines it as “The use of imagination or original ideas to create something; inventiveness” and any list of words around creativity will say originality, imagination, inspiration, ingenuity, vision etc and indeed for art one will read skill, knack, talent, ability, virtuosity.
This may be the new orthodoxy it seems(albeit soundly remarkably similar to some older ones as well), hand in hand with an increasing neoliberal economic determination of our social status, utterly predicated on how useful to the economy we present. It reveals a cold, brutal, ugly world where the arts and creativity only serve to condition recruits to be useful to corporate and competitive agendas. That’s not art – it’s perhaps the exact opposite.

But this nakedly ideological position is at variance with all of us who are artists, who have toiled to create and help others do likewise and who have consistently struggled to have our profession recognised beyond such trite, unsophisticated financial analysis.

Successive government administrations locally have struggled to understand the profound resource that artists of all disciplines represent. Instead, for 10 years now, we have seen opportunities and financial support wither by over 45%.  Whilst a lifeline might be thrown to some arts organisations now and again, what we need is a complete renewal of this society’s recognition of how important the arts are to our lives.

The arts and creativity do feed into our ability to transfer the skills we have; as makers, dreamers, disruptors, players, performers, writers, painters into a multitude of arenas of human activity – from education, to health, from industry to spectacle, to consolation, from world changing design to transforming ourselves, inside and out.

The arts enrich our own lives, giving us a space to reflect, to express who we are and what makes us different and what holds us in place. It is that freedom and simultaneous reward of security and confidence that makes the arts so utterly invaluable in our society. Whilst perhaps it takes supreme confidence to make art, live, in front of tens of thousands of people, the satisfaction of making something, of our own, representing our effort, our design our nature, is what is so compelling and useful about creativity. The arts help everyone take the small steps to more confident lives.

So, if the next generations want to grow up  more confident in their ability to express themselves, more eager to explore new ideas, more at ease with who they are as people and more able to blend experience into narrative, then we should support the arts and fight for their promotion right now.

The challenges faced by our children grow increasingly greater with every season – the social, environmental and political world is undoubtedly scarier for these new generations than for many previously. Now is the time to nurture the arts and recognise their power to transform.  We shouldn’t exploit the arts or indeed our children's creativity to feed the failed economic ideology of constant growth but harness that power to combat its effects.

Support your local artist – support the arts for our children.
ArtsMatterNI